Note: The instructions below are for the red round bushing.  The oblong yellow bushing will not use the gray cup to install you can simply press it into place with your fingers.

2.  Familiarize yourself with the direction that the bushing should be installed into the cable end based on the way the cable lies on the transmission.

3a.  For metal ring style cable ends, install the receiving cup onto the cable end. 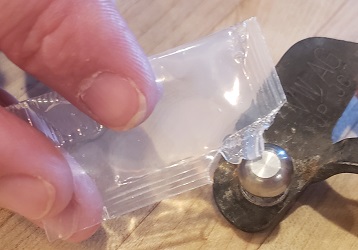